You are here
Home > Articles > Girl Power on Stage 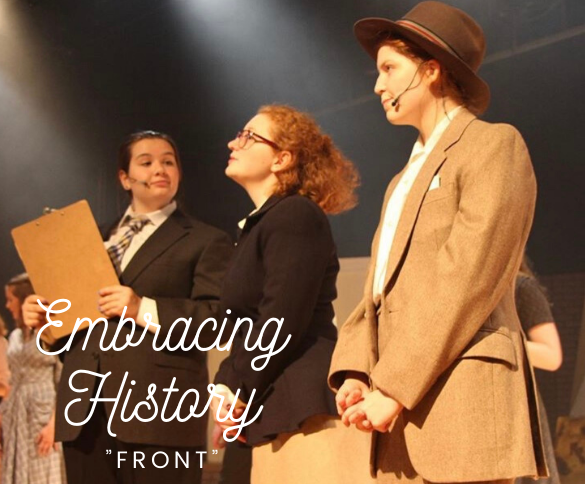 It has been quite an eventful week for the Mercy theatre community!  Not only did our girls put on an outstanding show covering the London blitz in World War II, but Mr. von Kampen announced the Spring musical: ”Chicago!”

Excitement is filling the halls this week with this news.  Although I can sense “Chicago” will be a great musical, it will be a challenge to pass up Mercy’s most recent performance.

Over the weekend of October 25th, as previously stated, Mercy presented the play, “Front” that follows a group of women during World War II. The plot was unique compared to a usual high school performance.

Starting with a warning for sensitive viewers, the show consisted of scenes with bombs, depression, suicide, and murder. Although these topics are heavy to the heart, it is very educational and important to embrace such a devastating time in history.

The actors involved took this challenge head on and showcased these roles perfectly. Sitting in the crowd, it felt as though I was there, and I truly felt every emotion. M.E. Adams, a senior who played a main role, described it as “a whole new experience.”

Adams has been in shows since her freshman year, but seemed especially passionate towards this one. “I’ve never experienced a show so real, raw, and rough. When we started rehearsals we started with mini history classes. They included everything from actual propaganda films and virtual reality bomb shelters of World War II. The heaviness of the show made me think about how serious and respectful our performance needed to be. The topic of the show inspired us to think of the impact we might have on our audience.”

The seniors were well educated and prepared for this production. It was clear that they had been working on perfecting it for months prior.

Their roles also consisted in mentoring and helping the underclass-women to have a full understanding of what they were doing. Their hard work surely paid off, for everyone in the auditorium left with tears in their eyes and more appreciation in their hearts.

Anyone who had the opportunity to see this show is extremely lucky. Following it was an adventure. I was very clueless as to what to expect, but I’ll always be thankful I got to experience such a powerful production in my own school.

It can be tough to open up to such heavy topics, however if there is anyone who can portray topics like this, it‘s a Mercy girl.

Mercy Day Ended In A Hospital Visit For This Mercy Senior

PA as an underclassman