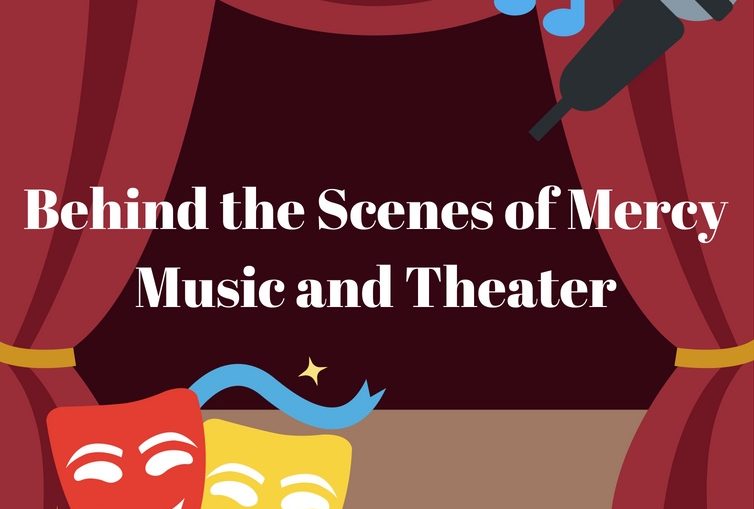 Mercy High School is a diverse community full of well-rounded students who are involved in a wide variety of activities. Whether it be clubs, sports, or the fine arts, there is something that will appeal to all interests. Coming from their grade schools, the incoming freshmen can either join the activities they were already involved in but now work at a faster and more advanced high school pace, or find a group to join that they didn’t know they would love until this year. Mercy allows its students to experience new things and delve deeper into already possessed talents. An area of Mercy that fits these qualities perfectly are the music and theater programs. The girls involved in these activities are able to be themselves with friends while doing what they love: which is to perform. The music and theater programs bring pride and joy to Mercy as these girls are very talented, lively, and always fun to be around. They are hardworking and dedicated to what they do. Without music and theater, Mercy wouldn’t be the same.

Theater is a time consuming program to be apart of. However, I have never seen a group of girls perfect it as much as the Mercy program. Being a loyal Mercy theater enthusiast, I have had the pleasure of watching many of their plays. After each time, I am left amazed at the perfection of the actresses and the seamless transitions aided by the tech crew. It is clear to the entire audience that many hours were put into making the show flow as smoothly as it did. Each year, the theater program puts on two shows, usually one play and one musical. Play practice is Monday through Thursday for a couple hours each night. The bond that the cast and crew creates while practicing can not be broken. This year, the next play that is being put on is “Alice in Wonderland”. Everyone involved is very excited for this title and tryouts were held this past week for parts. Another aspect of the theater program is Drama Club. Run by President Emilia Plaseck, Vice President Ina Keating, and Publicist Audra Pflug, Drama Club is an all-inclusive club that encompasses anyone who has a love of theater but might not want to commit the time into putting on a show. Because of Mercy’s welcoming environment, in addition to the theater program, classes like Stagecraft and Intro to Theater are offered to familiarize any girls that might be interested in joining the theater program in later years.

Show choir is a group of girls who work on a dance and song routine from the end of June until the beginning of January. The shows consist of five songs and dances but it proves to be a lot harder than just memorization of these routines. All 34 girls, named The Treblemakers, must execute perfectly synchronized moves in the exact same manner while staying on tune and singing the five designated songs, which will be about the duration of 20 minutes. Practices are Mondays after school and Tuesdays and Thursdays before school. At competitions, which are located at different high schools on Saturdays during the season from January to March, the judges will critique the choir on sound, presentation, and preparedness. The judges will score on a point system. 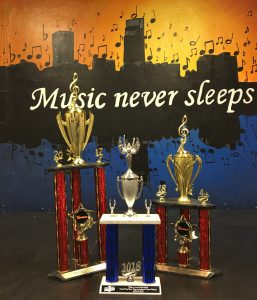 This year, The Treblemakers are working on a special routine that centers around woman empowerment. Mrs. Graff, the show choir director, told me about how excited she is for the upcoming theme. She said, “At this time, I can’t give you song names because we want the show to still be a surprise! However, we are doing five songs that are centered around woman empowerment. The show is titled ‘Woman on the Rise’, and it’s all about us “rising” up and being our best possible selves, and supporting each other as we grow in sisterhood.” The show choir is working on many other new and exciting things this year besides the upcoming routine. For the first time, the show choir will also have a band to accompany them. Mrs. Graff explained to me, “When complete, the show choir band will include electric bass, electric guitar, drums, a synthesizer, which is keyboard parts with different sounds, and possibly brass instruments.”. Mrs. Graff will hold auditions for this band soon.

Everyone involved in the theater and music programs, as well as their many followers including me, are excited for the upcoming seasons. The girls involved in these programs, whether that be the Treblemakers, the actresses, the band or the many involved in the tech and crew, are very hardworking and dedicated to putting on a great show. Each performance is well executed and perfected, leaving the audience both in awe and wanting more. I know I am looking forward to seeing the show choir performance and “Alice in Wonderland” because I know the girls will deliver excellence as usual.

Tips For Staying Fit During the Off Season