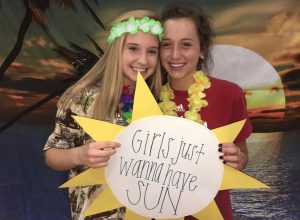 The doors opened at 8:30 P.M. and high schoolers began filing into the gym. While the dance had also been held in the gym in previous years, it had a new set up this year that seemed to change the Welcome Dance completely. The divider was lowered from the ceiling to cut the gym in half. Senior Maddie Baker shared her opinions on the divider by saying, “I love the divider! It makes it so that there isn’t as much open space so people are actually dancing instead of standing around!” This year’s Welcome Dance was the first to incorporate the divider and it turned out to be a huge success!

In addition to the divider, there was also excitement in the setup from the plethora of beach-related decorations. The highlight of the decorations was the “picture area.” This area could be found in the corner of the dance floor. There, dancers could be found posing in front of a beach wall hanging, wearing props and holding signs with phrases such as, “Sun’s Out, Guns Out” or “Girls Just Wanna Have Sun.” The photo area was frequently visited by dancers all throughout the night. Some of these pictures can be found on Twitter or Instagram under the hashtag #seasthedayMHS. 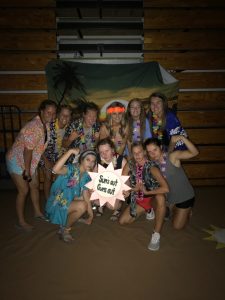 While the setup was new and exciting, the highlight of the entire dance was the actual dancing. Dancers of all grades brought their best moves to the dance floor. Even the chaperones couldn’t resist the urge to join in the fun. Ms. Umstead pulled out a few of her best dance moves during Taylor Swift’s “Shake It Off.” There was also a rap/dance battle between Senior Cece Coniglio and a junior from Papillion LaVista. The DJ, “DJ Paul”, brought a screen and projector so that students could freestyle as well as follow moves from music videos. The screen became especially crowded during the song “Single Ladies” by Beyoncé. One of the most memorable songs of the night was “Come On Eileen” by Dexy’s Midnight Runners. This song is a Mercy dance classic and the Monarchs did not disappoint on Friday night when giving the song their all.

Throughout the whole night, high schoolers shuffled through the doors and onto the dance floor. Dancers continued to show their moves up until the last song which ended at 11:30. As the lights turned on, people began laughing as they looked around at how much their friends had been sweating. Junior Jojo Fett said that “it’s always a good sign when you sweat at a dance, that’s how you know it was a successful one.” The 2017 Welcome Dance was indeed a successful night. It was the perfect end to Mercy’s Welcome Week and a great start to “dive into the new school year.”

Spanish 3 and 4 Meet a Celebrity

The Importance of Being Involved