You are here
Home > Around Mercy > The Monarchs Are On Pointe 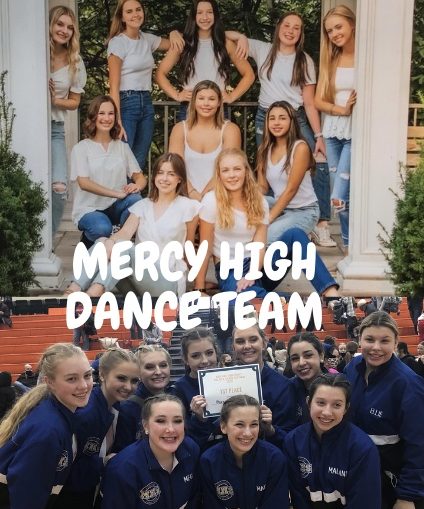 On Monday March 28th and Wednesday March 30th, Mercy High School held our dance team tryout clinics. The number of girls that arrived at clinics consisted of 11 girls of all grades.

At Monday’s clinics they all got into one big group and learned basics, such as the kickline, expectations, and team rules. After this rigorous talk, then split up into two different groups. One group went with the newly “retired” dance seniors who helped them learn a dance that consisted of hip hop, pom, and jazz styles. The other group went with more seniors who helped them focus on their technique. After spending a while on these complex moves, then got back into a big group and worked on the kickline and dance together.

During Wednesday’s clinics they repeated the exact same process. After they followed that routine they went over a contract given by the dance team coach, Mrs. Kilpatrick, stating the expectations should make it onto the team. These clinics helped prepare girls for the dance team tryouts on April 3.

If people do not show up to clinics without a reason you may not try out for the team. During this very competitive audition, the girls each preform numbers and when it is called, they then go into a separate room with a panel of a judges and recite the dance that they’ve learned.

It takes about a week to find out whose made the team. When asked, How do you feel about being a senior next year who will most likely make the dance team Riya Ketelsen 23’ responded with, “I’m really excited to be a leader on the team, I’m still nervous for a new season because you never really know how a new season is going to play out. I’m really excited to have a new team especially since we are losing a lot of our seniors, so there will be a lot of new people on the team next for year.”

If you want to dance, make that “pointe” known! Come out and try out for Mercy’s dance team next year!