You are here
Home > Around Mercy > Greenie Parade Winners 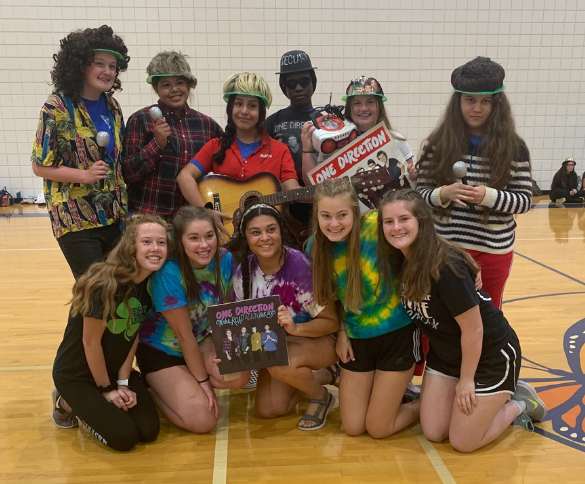 One Direction was a boy band consisting of 5 boys, and it has been very popular among teenagers, especially girls for many years. The seniors and freshmen alike had a great interest in the band and were pleased with how their theme turned out.

Seniors Nikki Kotrous, Madeline Riesberg, Rachel Grigsby, Sadie Weiner, and Gina Troia chose their theme because their “captains really like One Direction, and we all thought it was a good idea.” In planning the costumes, the seniors “found a lot of our ideas on Pinterest, and when we went shopping we came up with a few more ideas for our costumes.”

Both the seniors and freshmen enjoyed their experiences with the greenie parade, but they had different ways of liking the parade. The seniors liked how they had a sleepover before where they bonded, talked, watched movies, and through the whole experience grew closer through problem solving. The freshmen said “it [the greenie parade] wasn’t as embarrassing as we thought. We had a lot of fun and we think our sisters did a really good job with our costumes.”

The freshmen dressed as the 5 boys: Liam Payne, Harry Styles, Louis Tomlinson, Zayn Malik, and absent member Niall Horan. Other members in the group dressed as a security guard and a crazed fan.

While One Direction won, the second place winning theme was “Tik Tok.” Tik Tok is an up-and-coming social media platform where users create unique, short videos. The “Tik Tok” group dressed up in costumes relating to a few of the most popular Tik Toks.

Freshman, Freshman are you Ready?

Five TV Shows and Movies to Binge During Thanksgiving Break