Student Climate Ralliers Take Action Against what their Parents Ignored.

A dog, two bikes, and about 50 teenagers participated in a rally for the planet on Saturday, April 27. The rally was spearheaded by Students for Sustainability, a group created through the Omaha Students’ Union which is a collective of various youth political movements lead by student advocates. Students, along with a handful of parents, teachers, and established activists, joined in Memorial Park to motivate each other and those driving down Dodge street from 2-4 PM to take action against climate change.

Cate Kelly, the founder of students for sustainability and leader of the rally, kicked off the event with an impassioned speech. She was followed by Dr. Richard Miller a professor of sustainability studies at Creighton University. Kelly Valentine from Scout Dry Goods Store also spoke in hopes of gaining signatures on the petition to ban plastic bags in Omaha. The final speech of the day was given by Ryan Pendell a representative of Citizens Climate Lobby to encourage support for a current bill in Congress called the Energy Innovation and Carbon Dividend Act. Petitions were passed around for the plastic bag ban, the Citizens’ Climate Lobby bill, and to increase renewable energy at OPPD. To close the rally, all attendants stood over the Memorial Park Pedestrian Bridge and waved signs at Dodge street drivers.

Word of the event was spread through social media, but mother nature did not get the memo. When the rally began, it was a chilly 40 degrees. Although the 70-degree weather of the previous days might have resulted in a stronger turnout, the cold did not keep everyone away. The many signatures added to the petitions were written shakily with frozen fingers. People were bouncing up and down while protesting on the bridge, both out of a passion for the topic and to stay warm.

Both the speakers and the signs communicated frustration that serious action against climate change has not already happened. Cate Kelly expressed her anger during her speech declaring, “Our generation is asking questions that no generation has ever had to. Will the ocean be bleached due to rising temperatures by the time I am 30? By age 40 will I still have clean air to breathe? … these are intense questions to be asking as a 16-year-old.”

Ryan Pendell continued the concerns about the future of the youngest generations during his speech when talking about why he got involved with citizens climate lobby. He explained that his 2-year-old son’s future was his biggest motivator.

Dr. Miller spun his frustration at the older generations into inspiration for the students at the rally saying, “I am actually more hopeful than I have been probably ever. The reason is because young people are recognizing that your elders have failed you.” He also cited examples of past political movements that were sparked by young people.

Cate Kelly gained her inspiration for this rally from other, more recent, youth movements. Specifically, the global climate strikes of this spring inspired by Greta Thunberg, a 16-year-old from Sweden who is now nominated for a Nobel Peace Prize.

Cate said that she has learned the importance of collaboration through her experience of organizing the protest. Working to put the Omaha Students’ Union’s mission of, “engaging peers in the political process,” she made sure to make room in discussions for everyone’s ideas. She explained that she has faced issues as a student activist because people are reluctant to take her seriously. People assume that because of her young age, which is often mistaken for younger due to her short stature, she is not well educated on the subject of climate change. She combats that assumption by saying, “In all honesty we don’t, we don’t really know w 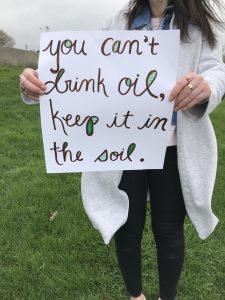 hat weare doing, but we have to do this because you haven’t done anything.”

Although she claims to not know what she is doing, she was still able to organize a rally to save the beautiful earth that received a solid turn out on a not so beautiful day. Her call to action for her peers to is to get involved in the areas you hope to see change and to not be afraid to pressure the adults for change.

See You on the Court

An Artist in Quarantine