You are here
Home > Around Omaha > Girl-Power Movie Rocks Theaters

Aksarben Cinema, one of the more popular movie theaters in Omaha, is usually pretty crowded with people wanting to see a good movie. While it isn’t too usual for me to go to the theater, preferring to save money and wait for it to be available to rent, there are some movies that get so much hype that I have to go see them. One of these movies that I heard about for days prior to me viewing it was Ocean’s 8.

After I saw this film, I immediately saw why it generated so much talk, and especially why I heard so much about it around Mercy events and girls. It was one of the most girl-power  movies I’ve seen in a while. With a predominately female cast, it tells the story of eight women who band together to accomplish a high stakes mission. While I was fully 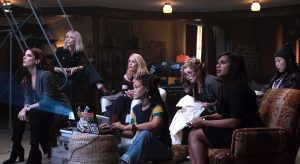 engaged in the interesting plot and course of action, most noticeable to me was the cast. I was shocked to see familiar face after familiar face be introduced as characters while I sat amazed in my seat in Aksarben. Anne Hathaway, Sandra Bullock, Rihanna, and Cate Blanchett are just a few of the famous celebrities that showed up in Ocean’s 8.

Even after the movie ended, with the credits rolling, this movie still managed to surprise me. I was informed by my friend that this was actually a sequel to another Ocean’s movie. I was surprised to hear this because at no point during the movie was I confused by the plot. It did an amazing job explaining what I had missed in not having previously seen the first movie.

I would highly recommend seeing Ocean’s 8 next time you go for a movie night. I left the theater feeling empowered in being a girl and overall very impressed with the whole film. It was definitely worth the meager $10 I spent for my ticket.